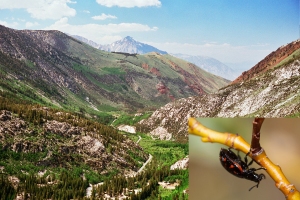 Global warming may drive many species living in the mountains to higher altitudes in search of cool, moist conditions. At high elevation, organisms face a different kind of stress: thin air! We know that low oxygen levels (hypoxia) at high elevation cause altitude sickness in humans and other mammals, but we have little understanding of how environmental hypoxia affects insects. We studied effects of high elevation on populations of a willow leaf beetle that lives in California’s Sierra Nevada, near Yosemite National Park. Populations of these beetles differ with respect to genes that are involved in maintaining energy for survival and reproduction. We have also observed changes in frequencies of these genes along a north to south thermal gradient, and along steep elevation gradients. Here, we studied the effect of yearly changes in climate on beetles living along elevation gradients, and investigated mechanisms by which beetles are able to tolerate (or not!) high elevation. We surveyed populations from 1981 to 2018 and found that they expand to low elevations following wet winters, then retreat to high elevation during drought. However, beetle populations had trouble persisting at highest elevations, which were otherwise cool and wet enough during drought years for beetles to thrive. In a field experiment, we found that females laid fewer eggs at high elevations than at lower ones. At high elevation, they also dedicated more resources to producing mitochondrial enzymes that use oxygen to process energy. We could not explain these differences by examining local air temperatures at each experimental field site. This led us to hypothesize that beetles may experience a form of altitude sickness, due to low oxygen levels at high elevation. To test this idea, we raised beetle larvae at low (1250 m) and high (3800 m) elevation in the laboratory, measured how fast they grew and determined the activity of a mitochondrial enzyme that is an index of metabolic rate. We found that all larvae developed slower at high than low elevation, which suggests that they do experience altitude sickness. However, beetles with genes typically found in southern populations developed more rapidly and had higher mitochondrial enzyme activities than those with ‘northern’ genes. We do not know why southern metabolic genes might also be the ones that help beetles develop or reproduce more effectively at high elevation, but our results are consistent with the natural altitudinal range of the beetles- those found in southern populations occur at the highest elevations. We think that these genes may have evolved to help beetles to thrive at elevations where oxygen supply is limited, and might expect the frequency of these high-elevation genes to increase as global warming makes conditions too hot to handle down below.

Read the paper in full here.

For every paper published in Functional Ecology, the authors write a plain language or lay summary, which explains the research and its importance in a generally accessible way