The Arctic is warming at twice the average global rate. As a result, Arctic rivers are expected to undergo a shift in the timing and magnitude of annual high and low flow events while water temperatures will likely increase and becoming more variable; how the ecologically and culturally invaluable fish that migrate through these rivers will respond remains largely unknown. Among these fish is the arctic char, which previous research has shown to already experience warm (>21°C), shallow, physically challenging river conditions and large daily temperature fluctuations (>10°C per day) in some locations. 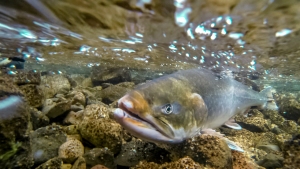 In pacific salmon, physical challenges and warm waters can restrict migration by increasing energetic costs while at the same time impairing the ability of the heart to circulate sufficient oxygen throughout the body. In the present study, we conducted field-based and laboratory experiments to determine how temperature and flow extremes may affect the ability of arctic char to overcome exercise and stress challenges relative to more southerly distributed salmonids, such as the rainbow trout. In migrating adult arctic char, the impairment of fundamental reflexes following a stress and exercise challenge (handling with air exposure) increased with river temperatures. In wild juvenile arctic char, temperature did not appear to affect maximum swimming speed, however, their ability to recover and repeat a swimming performance test appeared limited above 20°C. In the laboratory, we found a similar result when arctic char were warmed from 11-21°C at rates observed in the field, while rainbow trout were able to repeat their initial performance. 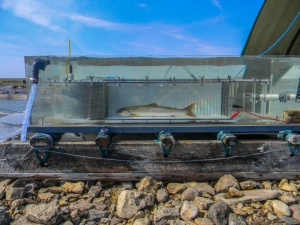 Following the assessment of swimming performance at warm temperatures, arctic char also appeared to have greater or prolonged disturbance of metabolic processes. In general, rainbow trout had superior capacity for exercise and warm tolerance than arctic char. When considered together with previous research, our results suggest that in some Arctic rivers, current migratory temperature and flow (e.g. shallow water) conditions may restrict the migration of native salmonids, while more southerly distributed fishes may be better suited to overcome these particular physical and thermal challenges.